Found in The Old Briefcase

Yesterday’s art lesson with the children prompted one of them to make enquiries of me. Did I enjoy painting when I was little? The question sent me rooting through my Papa’s old briefcase (Briefcase 1, Briefcase 2, Briefcase 3) where I have kept oddities from the past. I knew that somewhere in there was a project I’d done at the same age of our big boy now and kept because of the time and care I took over the illustrations. I was able to show the children that I did enjoy drawing and painting.

Like I said, I had only kept the project for the illustrations but yesterday I had a read of what was written and found it fascinating. I remember writing it on an Amstrad computer that my father had borrowed from the college for the holidays. It was really novel and fun to be working on a computer and to take printed work to school a new experience! How strange that seems now.

This is an extract from the project and while I seem to be a bit fixated with what can be heard it documents things I don’t really remember.

The woods behind the house were virtually overpopulated with pheasants, which the Game-keeper bred in the lane. But come the shooting season their numbers dropped like a dominoe rally. (Our eldest laughed at this simile, when I read it to him. It is a bit lame! The spelling mistake is authentic and uncorrected in the original.) Men would stand in the field neighbouring our house, with dogs to heel. The beaters would pass in a noisy rabble down the lane and we stood at the window cursing them as if it would prevent them. But usually the Game-keeper kindly rewarded us with a brace of pheasant. There were a very large amount of pheasant, and in the early hours of the morning you could count as many as seventy two (that’s very exact!) in one half of the field. 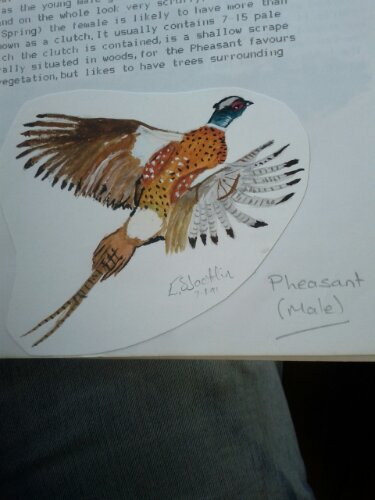 Although the Game-keeper feeds the Pheasants their natural food is seeds and insects. But they may also eat small lizards, snakes and mammals. (Really? I guess that is true if they can find any snakes and lizards.)
The cock is a particularly attractive bird, and as usual the female is a dull brown, although she has very small detailed patterns on her feathers. Unfortunately they are brainless in behaviour. Occasionally they would fly into our garden and, sometimes for as long as a day, run continuously up and down the fence-line trying to get out.

The males vary a great deal in plumage, but Spring is when they look their best. In Autumn, as the young male get their masculine plumage the adults lose theirs and on the whole look very scruffy.

In the breeding season (Spring) the female is likely to have more than one batch of offspring, known as a clutch. It usually contains 7-15 pale buff eggs. The nest, in which the clutch is contained, is a shallow scrape in the ground. It is generally situated in woods, for the Pheasant favours almost any thick ground vegetation, but likes to have trees surrounding it.

This event I don’t remember at all.
One year, a cuckoo laid its egg in a current nest (though I can not remember who’s it was) in the eaves of our house. After not long it hatched. The baby cuckoo fell out of the nest onto the gravel below and died.

It was a project on wildlife and I had chosen to write about the wildlife around our old home. I give my reasons why in the introduction: I say my last home because there was a far greater variety of wildlife and I took more interest in it. The house was in more open country than my present house.

I write about the roe deer with observation I again can not recall.

We used to regularly watch, in the evenings, three Roe deer in the field. Occasionally we saw them in the mornings. There were two buck and one female, which is unusual for they are generally found in pairs, being more solitary creatures. They would bound away if disturbed, showing up the white patch on their rump…The interesting thing about one of the males we saw was that he only had one antler and even that one was broken and half hanging off. His antlers never grew back again.

What did my teacher have to say?

I am a home-educating mother of four children. We live on a small holding in Wales and my husband is active in local politics and the lead pastor of our church, Festival Church.
View all posts by deerfeet →
This entry was posted in Writing and tagged Art, Briefcase, Growing up, Juvenile writing, Nature, School, Wildlife, Writing. Bookmark the permalink.